Now that I’m back in some semblance of health after that nasty cold, it’s past time for me to post about my Metatopia experience. First of all, I want to thank Double Exposure for putting together a great con. Having had a bit of experience in a previous career dealing with convention organization, I can tell you it’s not easy. It drains the life out of you. So, well done at Metatopia!

Next, I have to say that this California girl was in for a bit of a shock after my experience playtesting there. I’m reasonably well traveled; I used to do a great deal for my job. But quite frankly, I was surprised to find out just how differently people play games from different parts of the country. Sure, my experience has been limited, but I did playtest at Gencon with participants from around the country. That is not to say that people at Metatopia were unfriendly, quite the contrary. Everyone was very welcoming; folks engaged me in conversation from the moment I walked into the hotel. Rather, as I am learning, different people approach games differently depending on their cultural-geographic home. I realize I am stating this inelegantly. Truly, though, I had (in ~40 playtests) never seen so many playtesters play Roadtrip! quite so aggressively. Last week, I posted my overall lessons learned here. But now, I’d like to delve more into the playtest results.

After the first couple of sessions, I found myself trying to make the Highway deck nicer. As was avidly demonstrated by game play at Metatopia, if players do not play the game with a certain levity and strategic foresight, the game may feel like it forces players into ultra-competitive leader-bashing. However, as soon as I made the deck nicer (a recommended 50% attractions, 30% boons, 20% hazards), play became too benign. Roadtrip! lost its humor, and felt like group solitaire. None of this means that Roadtrip! is bust, of course. Playtesting is to figure out where there might be issues so that they might be addressed. Furthermore, the tinkering only reaffirmed its mechanical solidity and thematic tightness. However, upon a week’s worth of reflection, here are the specific suggestions from the playtests in the Northeast:

Identify the market demographic. I have been asked now a few times by those with more business savvy, to define the target audience for Roadtrip! In my mind, I have a perfect image of family and friends sitting around a table sharing stories of past summer vacations. Simultaneously, they are building a hilarious narrative from current game play. More’s the better, if they intend it for the road. I intentionally designed Roadtrip! to be a game accessible to an entire family and group of friends – a game with a fun theme, appealing to all ages and genders, yet strategically solid enough to engage more sophisticated players. So, of course, when a group of disparate folks play (as sometimes happens in playtesting), the shared experience can be less rewarding in a predictable way. Nevertheless, it is difficult to express the game’s intent without simultaneously, and perhaps rigorously, defining its demographic. To that end, I am researching game demographics so that I might be able to define better the market I believe Roadtrip! suits. If you know any good books, blogs, or articles, let me know!

Devise a Learn-To-Play version. For a while now, I’ve been tinkering around with various introductory versions. Such versions would be ideal for certain types of playtests. And, in fact, a few of my tests to date have involved shorter, constructed variants. As I’ve discovered, though, it’s not as simple as just shortening the Itinerary. Because Roadtrip! is supposed to be accessible to novice gamers, a Learn-To-Play game necessarily must involve introducing various elements, like Passenger and Highway Cards, incrementally. At the same time, it should be a short game. The current metric within the industry is 5-10 minutes of orientation after pulling the shrink wrap off the box. This coming weekend, I’ll be playtesting a new introductory version, which I’ll be reporting back next week. Those of you who’ve played, share any ideas percolating in your minds! 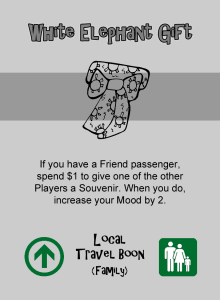 Enable more player interaction. Players have pointed out that the only structured interaction Roadtrip! facilitates is Highway Card hazards. Not all players agree since the game allows for strategic play of boons and attractions as well. I would add that part of the fun rests in sharing past adventures and laughing at the ridiculous scenarios the game elicits. However, setting perception aside, I have been wondering if there are additional ways to craft Highway Cards that would more obviously encourage player interaction. Blocking and boon conditional cards (like the White Elephant Gift) are on the top of my list. A pseudo-cooperative version could be developed too; yet, that would drastically change current play. Next week, I should have a sample of new Highway Cards ready for playtest. If you can think of other ways to encourage player interaction, please let me know!

This site uses Akismet to reduce spam. Learn how your comment data is processed.