I recently saw a tweet about the site Boardgamizer. If you haven’t seen it, check it out. It’s intended to stimulate the mind and challenge the skills of game developers, by randomly providing theme, mechanics, victory conditions and constraints for a yet-to-be-designed game. Needless to say, it got me thinking about how we designers dream-up games. Does a wicked mechanic spur your creative juices? I know just how to handle 52-card-pickup. Or does a constraint come to mind? It must be played on a short plane ride. Or does a nifty theme spring out? Swimming the English Channel.

Now, I must admit that part of me was somewhat appalled by the randomizer at Boardgamizer. To me, it seemed to be trivializing the sheer ingenuity of our purpose. Why do you need to bother with a designer if you can push a button and have a ready-made schematic? But as I thought about it further, I began to realize that just having a theme with mechanics and constraints, doesn’t really infringe upon a game designer’s territory. To a large extent that is where the hard part begins. How many times have you had to jettison one mechanic in favor of another or tweak the theme in order to fit your constraints? How many times have you started out to design one game, but ended up with something totally different? So, I began to understand how powerful the tool could be, especially if you have designer’s block. At the very least, Boardgamizer could provide you with alternative ideas or entirely new concepts.

Anyway, my own debate about the site’s audacity and veracity got me thinking, not just about my own process of game design, but also about other designers’ processes. I know for myself, theme comes first. Theme is what drives me. Yet, it doesn’t steer me straight into a mechanic, though I may have some initial thoughts; nor does it immediately compel me to scope out the parameters of victory or to constrain the gameplay. Theme takes me to audience. What story is compelling? How does that story allow for engaging and memorable interactions among players? None of this is to say that a captivating mechanic can’t take a designer to the same spot. Everyone has to have a starting point – a chicken or an egg, so to speak. However, for a game to be successful, it must appeal to players. Even solitaire has at least one player to which it must appeal. 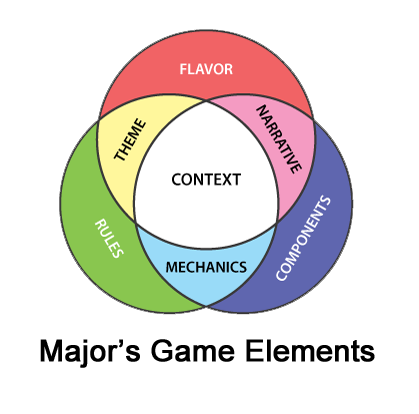 Amidst this mental exercise, I remembered an article by Mark Major on The League of Gamemakers, Theme vs. Mechanics: The False Dichotomy. What makes this article great to me is twofold. First, Major defines each term (I think my theme above is more closely associated with his flavor), which is essential for any engaging discussion on this topic. Second, he illustrates a model where flavor, rules, components, theme, mechanics, and narrative all intersect in context. Context is how, as Major writes, “…players understand the game as a whole and their role in it.” In other words, context is the key to understanding players’ experiences. If you want players to enjoy your game, you can’t just design in a creative void, imagining theme, crafting mechanics, and writing rules without any sort of a thought to the context in which your game exists and the reactions an audience might have. Thus, this fuller understanding is crucial to properly utilizing Boardgamizer or sites like it: a designer sculpts context by integrating and balancing the elements of a game.

Using Major’s game elements, I then tried to pull apart my design process further in order to provide insight into my own strengths and weaknesses.

Using his terminology, for me, it all begins with what he calls flavor – the feeling, emotion, and setting into which I want to immerse the players. Narrative and theme follow closely. How do I want the players to interact with the game? What stories do I want them to walk away with? Once I get a handle on these three aspects – flavor, theme, and narrative – I then have an understanding of the game’s critical aspect, context. From context, I work outward (and downward) on components and mechanics. Of course, as my focus remains solidly on flavor, narrative tends to overshadow mechanics in my components. This approach, in fact, is a problem sometimes since I hold onto clunky, but flavorful components much too long, simply because they exude so much flavor. Finally, starting with context and theme, I pull everything together with fully written rules. It’s easy to see flaws in my process! For instance, why not write down the rules earlier? Or why not engage with mechanics earlier to avoid some of the component redesign? Also, I think what the diagram illustrates is my own hierarchy of game elements, with flavor, and its accompanying theme and narrative, being the most important aspect of game development to me. Where I fall short (and so frequently get stuck) is on components, mechanics, and to a lesser extent, rules. Clearly, looking at my own process this way can only help hone my abilities. Perhaps I should challenge myself to start with mechanics, or at least with their intersection with flavor, components? Moreover, even if, flavor remains at the apex, I should not neglect the other elements quite as much as I tend to. In my next blog post, I’ll provide a much more detailed example of my process (and its foibles) through my current project.

So, back to my original question. How do you design? What is your egg or chicken? What does that tell you about your strengths and weaknesses in your own process?

This site uses Akismet to reduce spam. Learn how your comment data is processed.